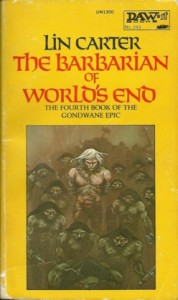 Ganelon Silvermane, a name to conjure … well, to conjure the imagination of a thirteen year-old boy. Lin Carter’s Gondwane epic, of which The Barbarian of World’s End is fourth book (hey, I started the Lord of Rings with Two Towers, I guess it’s a habit), is a strange thing. Reading the book, I felt like I was reading a bizarre fairy tale meant for children (or children at heart). There is very little dialogue, and the dialogue there is is not the stuff of Shakespeare. The prose is written as though the story is being told to you by an uncle – and from the subject matter, probably a very strange uncle whose had a bit too much to drink.

I am aware that this sounds like I’m trashing the book, but I really rather liked it. It is not great literature, but it is as imaginative as hell. The characters, creatures and city-states of Gondwane would feel right at home in Encounter Critical and any campaign setting that you could imagine would feel at home in Encounter Critical. Mobile cities, flying castles, tiger men, noseless brigands – dozens of things to fire the imagination of any Referee trying to run a retro-stupid world and have a blast doing it. When I started the book, I was not that impressed. When I finished the book, I was determined to find the rest of the epic and see what other bizarre creations Lin Carter had up his sleeve.