Just a quick note today to show off something that made me very happy, for a few reasons … 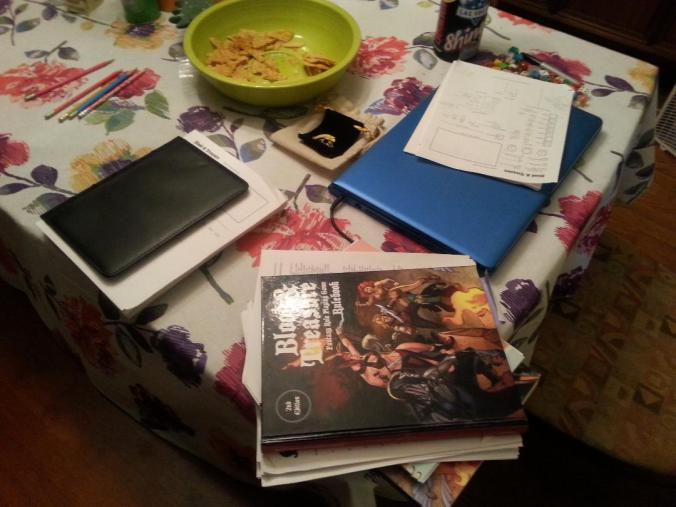 This is a shot of the game table where my daughter ran a session of Blood & Treasure for a group of her friends.

Of course, it makes me happy to see my game being played, especially on a table instead of via the internet.

It also makes me happy to see that the little acorn didn’t fall too far from the tree. Gaming was never something I pushed on my daughter. She showed interest from an early age, mostly because we collected some of those D&D miniatures that WoTC put out. Out games were not very serious and used rules I made up as I went along – mostly me asking what she wanted to do, and then having her roll the dice and try to beat a number to do it. We had fun – her party consisted of Romeo the dwarf, Aladdin the cleric, Tinkerbell the thief … and a few others. I don’t remember them all, but I do remember that the wacky antics of Romeo the dwarf were our favorite.

Since those times, we’ve played some real D&D – recently using the Moldvay Basic set with some family friends, wherein she has a played a thief that was the only smart enough not to challenge a dragon while 3rd level … and thus was the one who survived the fight without a scratch. The others should have listened to her, but a couple of them were just learning the game, and the most experienced player had most recently played 3.5 edition … so you know how that works in terms of player survivability. Just a wee bit different than old Basic D&D.

But now the child has become the DM (or Treasure Keeper, in this case), and it was fun to listen to her introduce her friends to the concept of gaming. They wanted to try because of Stranger Things – who knows how good that show has been to table top gaming? Listening to people who have never played before start hatching crazy plans involving 10′ poles and finding a way to kill the witch without destroying her treasure brought a smile to my face – the game may be old now, but it has the same goofy effect on the players. And, most importantly, they had fun and wanted more – 3 sessions in all before one of them went off to college.

Folks, games are supposed to be about getting people together and having a good time. D&D and its many clones and descendants do just that – so raise a glass to the games, and all the people who designed, played and enjoyed them over the years.

And no – I’ve not disappeared from the hobby. I’m taking a sabbatical and planing to get back to work in earnest in 2020.

5 thoughts on “A Moment of Paternal Pride”