Inflation was rough as hell, but if you could scrape it together you could get a new Tandy TRS 80 PC for $150 (or $390 in today’s dollars). This year would see the release of the hostages in Iran, the first flight of the space shuttle Columbia and an attempted assassination of President Reagan.

For the geek set, it was an embarrassment of riches in the movie theaters – Raiders of the Lost Ark, Mad Max 2, Evil Dead, An American Werewolf in London, The Howling, Halloween, Escape from New York, Clash of the Titans, Time Bandits, Scanners, Excalibur, Dragonslayer and, of course, the finest film ever made, Cannonball Run.

From the art in the first article, it would appear it was stinking up the place. 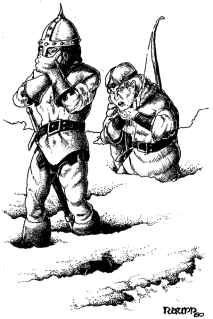 Actually, Robert Plamondon‘s article “Gas ’em Up and Smoke ’em Out” reviews how gases and smoke would work in a dungeon environment. It’s a sign of the times, as Old School (which I now realize means pre-1980) gaming gives way bit by bit to realism, at least for game designers and article writers. Here’s a sample:

This article uses a little math and engineering, but also comes across with some useful bits for referees:

Plamondon also provides a nice table of poison gases, which may come in just as handy for modern games and fantasy games:

Oh, and THIS GUY might be the Robert Plamondon of the article.

Next up, we have a couple old school NPC classes – the Astrologer by Roger E. Moore and the Alchemist by Roger E. Moore and Georgia Moore. These are nice and short classes, and could probably be adapted as non-classed NPCs with interesting abilities by most GM’s. Of course, I’d also love to see them used as PC’s in a game.

Here’s a taste of the astrologer:

Here’s a nice bit from the alchemist class:

“For the creation of homonculi, it is suggested that Pseudo-Dragon venom and Gargoyle blood be among, the. required ingredients, as well as the Magic-User’s own blood, since these items bear some relationship to a Homonculous’s poisonous bite and appearance. Costs and time for making a Homonculous are outlined in the Monster Manual.”

“Formulas for manufacturing cockatrices may be found in L. Sprague de Camp’s book, The Ancient Engineers, Chapter 9, “The European Engineers.” Additional notes appear in The Worm Ouroborous, by E. R. Eddison, “Conjuring in the Iron Tower.” Note that de Camp’s book refers to the cockatrice as a “basilisk,” and tells of an alchemical way of making gold from burnt “basilisk” parts.”

One more reason to read Eddison’s book, and now I want to find de Camp’s as well.

Oh Hell, and this:

“At the Dungeon Master’s option, cloning may be performed by biogenesis-studying Alchemists; this should be considered a very powerful (and very rarely performed) ability that will entail expenditures of 100,000 g.p. or more.”

Philip Meyers‘ article “Magic Items for Everyman” covers random magic items for NPC’s. They’re quite extensive and worth taking a look at.

Bazaar of the Bizarre has a couple nifty magic items. The Eidolon of Khalk’Ru is a real pip if you have a cleric or magic-user in the party (and who doesn’t?). There’s also the Bell of Pavlov, box of many holdings, ruby slippers, ring of oak and pet rocks – man I want to pit a guy with three pet rocks up against an unsuspecting party.

But hey – we’re not done with new classes yet. Len Lakofka presents a new fighter or ranger sub-class, the Archer. Really, it’s the archer, a fighter sub-class, and the archer-ranger, a ranger sub-class. This is accompanied by whole host of advanced rules for missile fire in D&D.

The main bonus for archers are bonuses to hit and damage, which get pretty big at high levels.

The big feature of this issue was the Dragon Dungeon Design Kit – a bunch of cardboard pieces you could use to create tabletop maps of the dungeon rooms adventurers encountered. You got wall sections, treasure chests and all sorts of dungeon dressing.

Michael Kluever‘s article “Castles, Castles Everywhere” is a nicely researched article about castles. Worth the read.

Roger E. Moore is back again with “How To Have a Good Time Being Evil”, a lighthearted look at the subject. Think over-the-top silver age comic book evil rather than the genuine article. One bit I especially liked was this, as it is a good description of the Chaotic / Evil alignment:

“Now for the group goals. Anyone who’s played Monsters! Monsters! already knows what the goal is in an evil campaign. The goal is to beat up on the good guys. The goody-good Paladins, sneaky Rangers, and less-than-macho elves are going to get what they deserve. What right have they got, breaking into our lairs, killing our underlings and friends, and taking away the treasures we worked so hard to steal? Besides, what we’re doing is the way of the universe. Only the strong survive. Nice guys finish last. I’m number one. If you help all the wimps get ahead in the universe, you undo natural selections and evolution, which is trying to make us tougher. Might makes right. And so on. Working up the goals and general background philosophy of an evil campaign is not difficult (and is actually a little disturbing, as some people say such things in seriousness. How little we know about our own alignments …)”

I think the true test of a great monster is great art. Well, maybe not, but a nice piece of art makes we want to use a monster, regardless of its stats. To whit, the skyzorr’n by Jon Mattson:

They inhabit deserts and badlands in hive communities (70% underground). They are matriarchal, ruled by queens (they look like grotesque bloated spiders) with High intelligence. They use weapons 50% of the time (longswords, scimitars, military forks, spears and slings). If two claw attacks hit, they get a bite attack. The poison deals 1 point of Strength and Dexterity damage for 2d4 turns.

Read the issue to get the full description – very cool. They also have sand lizards by Marcella Peyre-Ferry and dust devils by Bruce Sears.

I wonder if WOTC would consider making a monster book with all of these creatures in it?

Well – that’s all folks. No White Dwarf supplement this time, since it was bi-monthly. I’ll hit it next week (God willing and the creek don’t rise).