It’s been way too long since the last post, so hopefully this one will make it up. This is admittedly not an “old school” sort of class, but rather more of a “high fantasy” concept.

The incarnator is a mystic character class that can make the power of the stars incarnate on and within his person. These stellar incarnations appear in many shapes, but are always composed of light of a different color, based upon the star sign being invoked.

Incarnators train in much the same way as monks, psychics, and soulknives. They operate in training houses as tight-knit brotherhoods under the tutelage of a master.

In your campaign, incarnators might be the equivalent of magicians or psychics who specialize in star magic, or they might even have the blood of star gods and goddesses (the Pleiades) running through their veins.

1. Incarnators call upon the mystic power of the stars, in the form of the twelve signs of the zodiac. Obviously, different fantasy worlds might have different star signs, but the rules here use the traditional zodiac – adjustments may need to be made for other worlds.

Because an incarnator calls upon the zodiac, they must first have their own star sign rolled randomly, with a 12-sided dice, of course.

2. Incarnators are skilled at drawing astrological charts. The action takes one hour, and not only reveals a person’s star sign, but also acts as an augury spell for the person in question.

3. To manifest an incarnation they must make a task check (a Will save) modified by their Wisdom score. Manifesting from one’s own birth sign is at a +2 bonus, from one’s own element at no penalty, from other elements at a -2 penalty, and from an opposing element at a -4 penalty. It is impossible for an incarnator to manifest from his opposing sign.

There are three types of incarnations an incarnator can manifest:

Artifacts are objects of solidified starlight. Manifesting an artifact requires a Will saving throw made with no additional penalty (see above).

Summonings are creatures composed entirely of solidified starlight. A summoning requires a Will saving throw with a penalty equal to the monster’s Hit Dice.

Aspects are internal or external modifications of the body. Aspects require a Will saving throw with a -10 penalty.

If an incarnator is manifesting three incarnations from the same element, he gains resistance to that element’s related energy (fire, acid, electricity, cold) so long as his incarnations are manifested.

The artifacts, summonings and aspects associated with the signs are as follows:

Weapons: All incarnator weapons, including natural weapons, appear as solidified light of the appropriate color. The weapon acts in all ways as a +1 magic weapon of its type. A 6th level incarnator’s weapons also deal +1d6 points of energy damage based upon its element (i.e. Aries is a fire sign, so a warhammer of Aries deals +1d6 fire damage). A 12th level incarnator’s weapon acts as a +1 brilliant light weapon of its type. Weapons last for one turn (10 minutes). Manifested natural weapons permit an attack by the incarnator in addition to a held weapon.

Scales: The scales of Libra can take a measure of creatures, determining their alignment leanings (chaos vs. law, good vs. evil) and also the wisdom of an action (per the augury spell). The scales manifest for 1 turn.

Monsters: Monsters are energy constructs that fight as their normal type, but enjoy resistance to the energy associated with their sign. They last for 6 rounds.

Split: When a character splits, they become two incarnators of half their normal level and half their current hit points. If one is killed while split, the incarnator absorbs his former half, but suffers one level of energy damage (not drain). A split lasts for one round + one round per level of the incarnator.

Blinding Beauty: Per the nymph ability, this ability causes the incarnator’s body to glow with luminous, white light. Blinding beauty lasts for one round + one round per level of the incarnator.

Horse Body: The incarnator manifests a centaur like horse body of red light. He gains the movement rate and natural hoof attacks of a centaur.

Steam Body: Per the gaseous form spell, but the incarnator can choose to expand into the equivalent of the fog cloud spell. Lasts for one round + one round per level.

Scales and Gills: The incarnator gains a swim speed of 60 and water breathing (per the spell). Lasts for one round + one round per incarnator level. 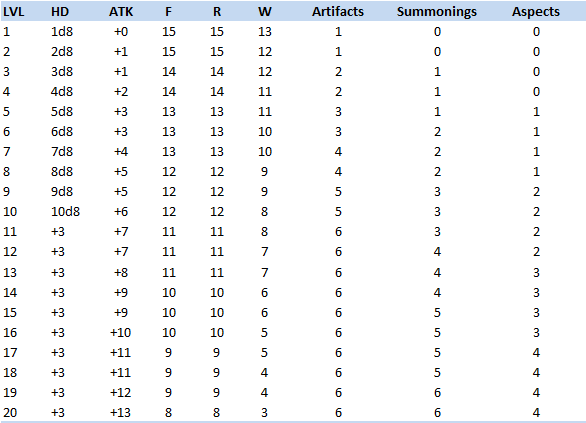 2 thoughts on “The Incarnator [New Class]”