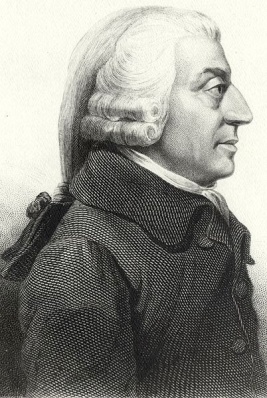 I have of late been reading Adam Smith’s Wealth of Nations. It’s a great book, and very enlightening, not only for his insights into the operation of economics, but also for his asides regarding the evils of slavery, the American revolution and, in a latter chapter, his investigations into war.

Specifically, his investigations into the costs of maintaining an army in times of war and peace. He doesn’t get too deep into the weeds, of course, but reading Book V: Chapter I: Part I reminded me a bit of reading the demographics that Gygax inserts, piecemeal, into the Monster Manual and elsewhere in the AD&D canon.

The chapter in question regards the costs to a sovereign in maintaining an army. It gives some ideas on different phases of human development, and their effect on manpower and expense.

Smith divides human development into three categories, with the earliest being hunters, the second shepherds and the third farmers and craftsmen. In Gygaxian, D&D terms, we could think of the humanoids (orcs, goblins, etc.) and human tribesmen as hunters, the human nomads and dervishes as shepherds, and the settled humans and demi-humans as the farmers, husbandmen and craftsmen.

I found the following paragraphs interesting:

“Among nations of hunters, the lowest and rudest state of society, such as we find it among the native tribes of North America, every man is a warrior, as well as a hunter. When he goes to war, either to defend his society, or to revenge the injuries which have been done to it by other societies, he maintains himself by his own labour, in the same manner as when he lives at home.”

“An army of hunters can seldom exceed two or three hundred men. The precarious subsistence which the chace affords, could seldom allow a greater number to keep together for any considerable time.”

In other words, most humanoid encounters are going to be with warriors and their wives and children. To put it another way, the wild folks you encounter in the wilderness in D&D are all warriors. He would also place the size of these tribes at a maximum of 300 warriors.

“Among nations of shepherds, a more advanced state of society, such as we find it among the Tartars and Arabs, every man is, in the same manner, a warrior. Such nations have commonly no fixed habitation, but live either in tents, or in a sort of covered waggons, which are easily transported from place to place. The whole tribe, or nation, changes its situation according to the different seasons of the year, as well as according to other accidents. When its herds and flocks have consumed the forage of one part of the country, it removes to another, and from that to a third. In the dry season, it comes down to the banks of the rivers; in the wet season, it retires to the upper country. When such a nation goes to war, the warriors will not trust their herds and flocks to the feeble defence of their old men, their women and children; and their old men, their women and children, will not be left behind without defence, and without subsistence. The whole nation, besides, being accustomed to a wandering life, even in time of peace, easily takes the field in time of war. Whether it marches as an army, or moves about as a company of herdsmen, the way of life is nearly the same, though the object proposed by it be very different. They all go to war together, therefore, and everyone does as well as he can. Among the Tartars, even the women have been frequently known to engage in battle. If they conquer, whatever belongs to the hostile tribe is the recompence of the victory; but if they are vanquished, all is lost; and not only their herds and flocks, but their women and children become the booty of the conqueror. Even the greater part of those who survive the action are obliged to submit to him for the sake of immediate subsistence. The rest are commonly dissipated and dispersed in the desert.

The ordinary life, the ordinary exercise of a Tartar or Arab, prepares him sufficiently for war. Running, wrestling, cudgel-playing, throwing the javelin, drawing the bow, etc. are the common pastimes of those who live in the open air, and are all of them the images of war. When a Tartar or Arab actually goes to war, he is maintained by his own herds and flocks, which he carries with him, in the same manner as in peace. His chief or sovereign (for those nations have all chiefs or sovereigns) is at no sort of expense in preparing him for the field; and when he is in it, the chance of plunder is the only pay which he either expects or requires.”

“An army of shepherds, on the contrary, may sometimes amount to two or three hundred thousand. As long as nothing stops their progress, as long as they can go on from one district, of which they have consumed the forage, to another, which is yet entire; there seems to be scarce any limit to the number who can march on together.”

In D&D terms, this applies to nomads and dervishes, and maybe those barbarian tribes a high level barbarian can summon. Smith would again make warriors of all the men in the tribe, and a even a few women.

“Agriculture, even in its rudest and lowest state, supposes a settlement, some sort of fixed habitation, which cannot be abandoned without great loss. When a nation of mere husbandmen, therefore, goes to war, the whole people cannot take the field together. The old men, the women and children, at least, must remain at home, to take care of the habitation. All the men of the military age, however, may take the field, and in small nations of this kind, have frequently done so. In every nation, the men of the military age are supposed to amount to about a fourth or a fifth part of the whole body of the people.”

So now we’ve reached settlements, and we find that their men-at-arms number about 20% to 25% of the population. An encounter with 500 nomads might include 250 warriors (assuming about 50% male/50% female), while you would need a settlement of 1,000 people to muster up 250 men-at-arms.

“The number of those who can go to war, in proportion to the whole number of the people, is necessarily much smaller in a civilized than in a rude state of society. In a civilized society, as the soldiers are maintained altogether by the labour of those who are not soldiers, the number of the former can never exceed what the latter can maintain, over and above maintaining, in a manner suitable to their respective stations, both themselves and the other officers of government and law, whom they are obliged to maintain. In the little agrarian states of ancient Greece, a fourth or a fifth part of the whole body of the people considered the themselves as soldiers, and would sometimes, it is said, take the field. Among the civilized nations of modern Europe, it is commonly computed, that not more than the one hundredth part of the inhabitants of any country can be employed as soldiers, without ruin to the country which pays the expense of their service.”

“A shepherd has a great deal of leisure; a husbandman, in the rude state of husbandry, has some; an artificer or manufacturer has none at all. The first may, without any loss, employ a great deal of his time in martial exercises; the second may employ some part of it; but the last cannot employ a single hour in them without some loss, and his attention to his own interest naturally leads him to neglect them altogether. Those improvements in husbandry, too, which the progress of arts and manufactures necessarily introduces, leave the husbandman as little leisure as the artificer. Military exercises come to be as much neglected by the inhabitants of the country as by those of the town, and the great body of the people becomes altogether unwarlike. That wealth, at the same time, which always follows the improvements of agriculture and manufactures, and which, in reality, is no more than the accumulated produce of those improvements, provokes the invasion of all their neighbours. An industrious, and, upon that account, a wealthy nation, is of all nations the most likely to be attacked; and unless the state takes some new measure for the public defence, the natural habits of the people render them altogether incapable of defending themselves.”

Here we see a justification for 1 HD nomads and humanoids versus 0-level humans. The humans are mostly farmers and craftsmen, and don’t have much time for training. Maybe we could say 1d8 hit points of nomads and hunters, 1d6 for farmers and 1d4 for city folk would be about right.

“In these circumstances, there seem to be but two methods by which the state can make any tolerable provision for the public defence.

It may either, first, by means of a very rigorous police, and in spite of the whole bent of the interest, genius, and inclinations of the people, enforce the practice of military exercises, and oblige either all the citizens of the military age, or a certain number of them, to join in some measure the trade of a soldier to whatever other trade or profession they may happen to carry on.

Or, secondly, by maintaining and employing a certain number of citizens in the constant practice of military exercises, it may render the trade of a soldier a particular trade, separate and distinct from all others.

The distinction between militia and standing army is interesting. In D&D terms, the militia are the 0-level humans and the soldiers are the 1 HD men-at-arms, with perhaps a few of the better of the men-at-arms being capable of becoming 1st level fighters.

So – read your Adam Smith, and everything else you can find – for you never know where you’ll glean something useful for your hobby.

4 thoughts on “Human and Humanoid Armies, the Adam Smith Way”