Rome looms so large in European history, and therefore on the ancient and medieval European wargames that informed so much of early fantasy RPG’s, that an article like this seems a bit useless. Of course, I’m writing it anyway, because – dang – you try generating this much web content without being useless once in a while.

Enough preamble. Let’s get down to Roman weaponry …

BIPENNIS
The bipennis, or labrys, is a double-headed axe that, depending on how one pronounces the word, could be a big hit at the gaming table. “You attack the orc with what?”

The weapons were most associated with Minoan civilization and the Greeks, and seem to have taken on quite a significant symbolic meaning, being adopted by Greek fascists, Greek metal heads and lesbians and feminists – clearly it’s a uniter and not a divider (unless used to separate somebody from their head). If you’re a cleric capable of wielding edged weapons, the bipennis might be a good one to wield.

CESTUS
Probably one of the first, “Dude, I want those” that I ever came across as a young geek getting into RPG’s. Essentially the anti-boxing glove, a cestus was made of leather strips, sometimes studded with metal or bladed, that was worn over the hands and used to beat the living crap out of people. For our purposes, we’ll use all three versions, and allow monks using the cestus, and any character with the Weapon Focus feat in the cestus, to treat them as either unarmed attacks or armed attacks, whichever is more favorable for the situation. 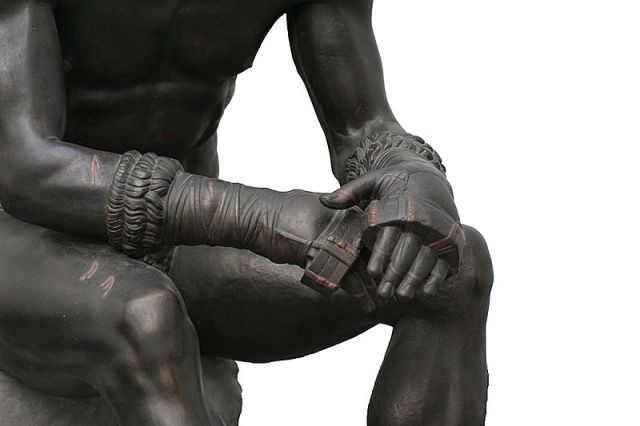 FALCATA
The name is new, but the sword is old. Rome’s Iberian allies and mercenaries employed these slightly curved, thick bladed swords and impressed their Roman pals with how effective they were in a scrap. Because of their shape, and the weight of their blade, a falcata scores a critical hit (if you use such things) on a natural roll of 19 or 20.

FALX
Falx are sickle-like weapons employed by the Dacians and Thracians, and later used by the Romans as siege hooks. The single-handed version was the sica, which is essentially just a sickle and is not covered here. The falx was the two-handed version, a pole weapon with a 3-ft. long wooden haft tipped by a long, sickle-shaped blade. The point could pierce helmets and the blade split shields. 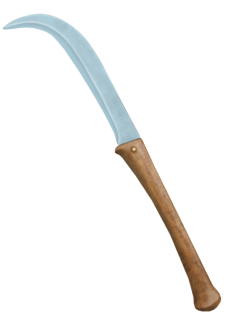 GLADIUS
While not the first straight-bladed short sword, the gladius could be one of the best known due to their use by gladiators, who are undeniably cool. The gladius was adopted from the Celtiberians, and was known as the Gladius Hispaniensis, or “Hispanic Sword”. 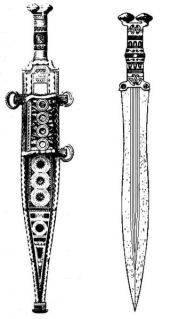 HASTA
Hasta means “spear”, which is handy, since hastas are, in fact, spears. They were carried by early Roman legionaries, and gave them the name hastate. In later years, they were abandoned for the javelin and short sword, but they still have their place in classical Roman violence. Hasta were about 6.5 feet long.

PUGIO
The pugio is the Roman dagger, one of the basic weapons of the Roman soldier (along with short sword, javelins and shield). Nothing fancy here, just a cool name.

PLUMBATA
I remember when I first got into AD&D, the darts confused me. The only darts I had ever seen were the ones used with dart boards, and I always pictured with a smile magic-users throwing those little things at people in dungeons. The plumbata is the real deal though, the mother of all lawn darts. These darts are weighted with lead and had barbed heads. Magic-users can hurl these bad boys with their heads held high.

SCISSOR
Yes, you can run with this. The scissor is a “maybe” weapon, about which very little is known. It might have consisted of a hollow, metal tube that was worn over the arm. The tube closes over the fist, and projected from this there is a semicircular blade. There was probably a crossbar in the end to assist in a gladiator controlling the weapon. The tube makes it useful as both a buckler and as a weapon. 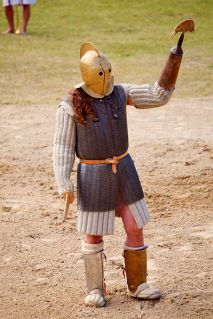 SPATHA
The spatha was the Roman long sword. Measuring about 3 feet in length, it was used in war and gladiatorial fights in first millennium AD Europe. Used primarily by the Germans, it replaced the gladius as the primary infantry weapon of the Romans.

All images found at Wikipedia

2 thoughts on “When In Rome, Kill As the Romans Do”