I was watching Babes in Toyland the other day (like you do), mostly because the daughter and I had a hankerin’ for Laurel and Hardy, and while viewing it, a strange thought popped into my head.

“If Mother Goose wrote D&D, little pigs would be a playable race.”

Naturally, one thing led to another …

The basic rules here are B/X D&D (or Labyrinth Lord, if you please). I’m not going to repeat everything in the rules (for now …), so if I don’t mention it, it works like B/X. The concept here is “what if Gygax was inspired more by nursery rhymes and fairy tales than swords & sorcery”. The game is still meant to be about exploration, treasure hunting (with some good deeds thrown in, of course) and fighting monsters, just with a veneer of (slightly tongue-in-cheek) Mother Goose-isms.

PRINCE
The prince works essentially like the fighter – can use any weapon or armor, d8 for hit points, etc. Princes are young, handsome men, and are always the children of one king or another (kings are as copious in fairy tales as grains of sand on a beach).

A prince with a 17 Charisma who has reached at least 4th level can elect to become a Prince Charming. A Prince Charming must serve either the King of Hearts or the King of Diamonds. His kiss can dispel any magical effect, he enjoys a +2 bonus to saving throws against evil magic, and he is bound to fight evil dragons, rescue helpless damsels and give generously to the needy.

JOAN OF ARC RULE: A female character with a Strength of 12 or higher can become a Princess (i.e. a female version of the Prince).

FAIRY GODMOTHER
Fairy Godmothers are always elderly women of an elfin demeanor. They fill the roll of the magic-user and generally follow the rules for that class, save that a fairy godmother knows all the spells (assuming you’re just using the spells in B/X) of a level she learns to cast (much as a cleric), and must possess her magic wand to cast any spell. If a knave is adventuring with a fairy godmother, the fairy godmother must adopt them as a godchild and do their best to teach and protect them. 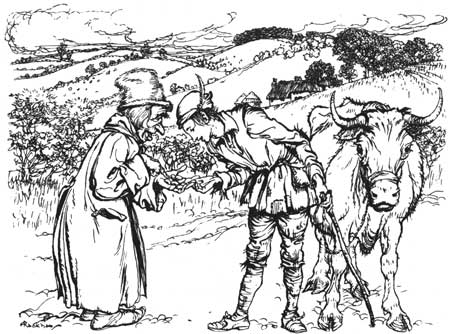 KNAVE
Knaves are boys and girls of common ancestry (1% chance of being the child of a king and queen who was hidden away with a peasant family to avoid a terrible curse). They fill the role of the thief, with the same skills and abilities, though some skills are renamed slightly for flavor:

* Traps do not play a big part in fairy tales and nursery rhymes, but the idea of confusing an opponent with a riddle, or needing to solve a riddle to get past a problem does crop up now and again. Naturally, players can still have their characters look for traps, and can devise ways to get past them without rolling dice; now they can instead roll dice to get past riddles or stun a foolish opponent (for 1d6 rounds) by asking them a real puzzler (the victim gets a saving throw even if the “ask riddle” roll is successful).

Each naughty or wicked act of a knave carries with it a cumulative 1% chance that they will be given a conscience (in the form of a talking cricket or something similar) to attempt to guide them into a more law-abiding and honorable way of life.

Curtal Friars are men with tonsured scalps who cultivate a healthy paunch (in order to demonstrate the great abundance of the Lord), wear simple robes (with a mail coat beneath, usually) and wield a club or mace in the name of God Almighty. They are, essentially, clerics in terms of rules, though their ability to “turn undead” works on a slightly different set of monsters (as not all of the B/X monsters appear in fairy tales or nursery rhymes).

Naturally, one can play a Nun instead of a Friar, though warrior nuns are generally pretty scarce in fairy tales.

DWARF
One of a group of seven who left his brothers to see the world. Dwarfs conform to the Dwarf class in B/X D&D. Each has a particular physical or personality trait that dominates their character, and for which they are named.

LITTLE PIG
The Little Pig replaces the Halfling in MG&G. Little pigs have a +2 bonus to save vs. fear (“who’s afraid,” they inquire, “by the Big Bad Wolf?”) and a particular skill at building houses and at setting traps (for wolves or others).

FAIRY KNIGHT
The fairy knight (or fairy dame) replaces the Elf class in B/X. They are permitted to wear up to mail, and though beautiful, they have no souls and thus are not to be completely trusted. 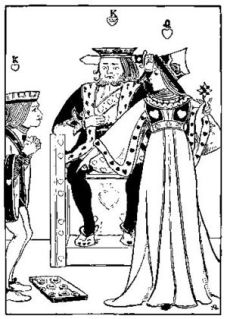 ALIGNMENT
Whereas B/X has three alignments, Lawful, Neutral and Chaotic, MG&G has four alignment which correspond with four royal houses in fairy tale land. A character must pledge his or her troth to one of these alignment (though they need not always cleave faithfully to that faction – unless somebody is watching).

Hearts: The character is pledged to the ideal of Love. He or she gets a +1 bonus to hit when defending this ideal (i.e. defending a loved one), but must pass a save vs. magic when confronted with the temptation of Lust.

Diamonds: The character is pledged to the ideals of Truth and Beauty. He or she gets a +1 to hit when defending beauty or seeking out the truth, but must pass a save vs. magic when confronted with the temptations of Envy and Avarice.

Spades: The character is pledged to the ideal of Judgment. He or she gets a +1 bonus to hit when fighting against outlaws and other evils, but must pass a save vs. magic when confronted with the temptation of Vengeance.

Clubs: The character is pledged to the ideal of Mirth and Merriment. He or she gets a +1 bonus when fighting spoil sports and bullies, but must pass a save vs. magic when confronted with the temptation of Cruelty.

16 thoughts on “Mother Goose is my Dungeon Master!”