I get a few questions now and then about where Blood & Treasure stands in terms of completion. I’m going to answer them.

First – my plan to include actual poisoned needle traps in the print books has run into some legal problems, so that’s out. Yeah – contact poison is out as well. Still no word on the possibility of working glyphs of warding.

Second – Here’s an outline of the different sections of the game and where they stand. Keep in mind, all of these sections are going through editing and playtesting, so take the “100% complete” tag with a grain of salt.

Once the sections that are “being given a serious edit” are “seriously edited”, they’ll go to the next stage of editing by Tanner Yea, my editing hero.

Also – here are the “final” covers for the Player’s Tome and Treasure Keeper’s Tome. 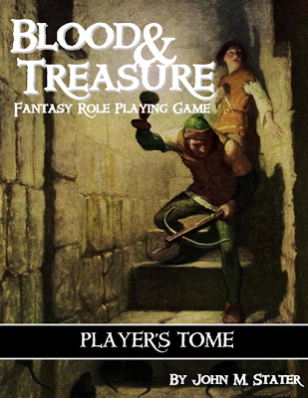 The Player’s Tome will include the Intro, Characters, Rules of Play and Magic chapters.

The TK’s Tome will include the Intro, Adventures, Monsters and Treasures chapters.

So – now you know. I’m also working on the S&W Rappan Athuk conversions (about 10 more chapters to go – this is going to be one seriously &^#&@ huge adventure – I’m pretty sure I’m going to run it on G+ when it’s finished) and NOD 15 (the final circles of Hell! Hallelujah!!!). When Blood & Treasure is in the can, I start on 1800 – American Empires in earnest. I really want to do something good with that one, and will probably make it compatible with Blood & Treasure.

I’m busy as beard groomer at an OSR convention, and thankful for it!

18 thoughts on “The State of Blood and Treasure”