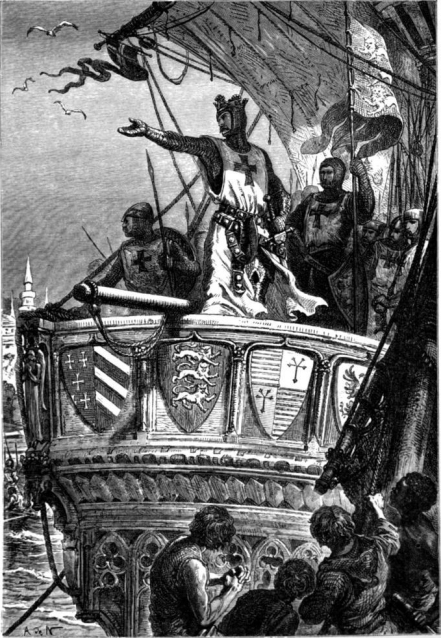 Let’s begin by defining nobles. Any character with a crown and a fief or kingdom can be a noble, but we’re looking at them as antagonists or support staff for the player characters, and putting them in the “monster” or NPC category.

The toughest nobles are the border nobles – the guys and dolls on the fringe of the wilderness fighting against humanoids / barbarians / neighbors day in and day out. We’re going to give these folks 9 Hit Dice, making them roughly equal to the name-level characters who might live next door. These folks probably have titles like baron or margrave / markgraf / marquis.

The next toughest are the lesser nobles dwelling within the kingdom’s borders – far enough from the barbarians to not be fighting every day, but close enough that they have to muster maybe once or twice a year to fight a war for their liege. Because they aren’t the upper nobility, they’re more expendable, and might very well have to form up in ranks and charge into battle. We’ll give them 5 HD to reflect their combat training and experience. These folks can be barons, viscounts, counts and maybe dukes.

Dukes, however, are usually part of the greater nobility, along with grand dukes, archdukes (yeah, all the various varieties of duke) and the royals – princes, kings, etc. The greater nobility are politicians more than anything else. They’re trained to fight, but they don’t have to do much fighting. We’ll give the greater nobility 2 HD to show off their training and better living.

This makes nobles pretty plain, really – just men and women with 2, 5 or 9 HD. What makes them noble? Well, power, of course. Some hold more treasure than somebody with their hit dice should hold. We’ll say the greater nobility have treasure as though they were CL 20 monsters, lesser nobility as CL 15 and borderers as CL 9. They also specialize in retinues. Nobles always get twice the number of followers that their charisma (we’ll assume a charisma of 10, but those nicknames we’re going to roll up can change that) would normally allow. Greater nobles have triple the normal number of followers.

Who follows a noble? Roll on the table below for each follower …

So, here are our basic noble stat lines:

Now, about those nicknames.

We’ve all heard them. Charles the Bold, Richard the Lionheart, Pepin the Small. They can describe the person’s appearance, faults, foibles, personality and deeds. So, why not let them make nobles something more than cookie-cutter monsters or NPCs.

What follows are 600 possible nicknames, 99% of them drawn from history. Yeah – the weirdest ones are all real – I added about 5 to give me a solid 600. Most nobles have a single nickname, a few have more than one (see below).

Roll 1d6 to determine which list to use and then 1d100 to determine the nickname. This post has the first list – the other five will follow (hey, this took a while – I need to get more than one blog post out of it).

Since I don’t know which set of rules you’re using, I tried to keep things basic. If your rules don’t give a bonus for high dexterity, then nicknames that give high dexterity should just be treated as descriptive. If a noble gets two nicknames that give him character class levels, then either treat he or she as dual-classed, or re-roll if that doesn’t make sense. Of course, anything that doesn’t make sense, ignore.

Where a title is mentioned (in ALL CAPS), insert the title appropriate to your noble. If your noble is a baron and you roll “Iron DUKE”, just change it to Iron Baron. For REGION, insert the name of a region or kingdom in your campaign world. For BARBARIAN insert the name of a human barbarian tribe or a group of humanoids – i.e. Hammer of the Orcs, Judge of the Scots. References to “virtuous spells” and “sinful” spells we’ll be dealt with later, though most of you can probably figure it out.

If a rolled nickname doesn’t make sense to you, re-roll. 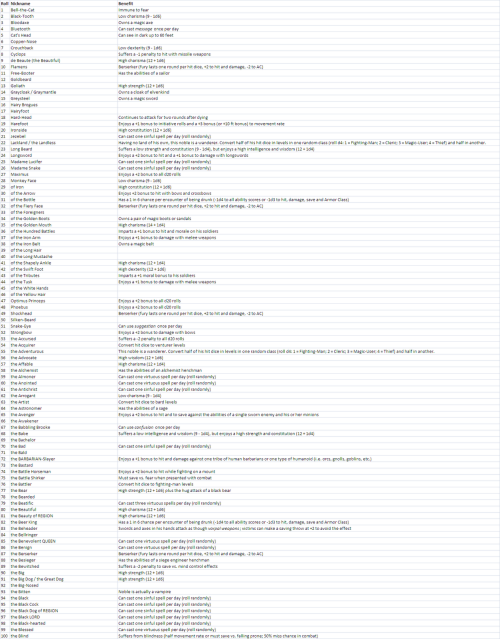 Baron Usted the Bald
Being bald doesn’t get Usted much, but as a noble he does get double the normal followers, giving him 8. We roll and find he has the following people in his retinue: For men-at-arms, three scribes (one is a 6th level assassin) and Marcus, the son of the Countess Genevieve, Usted’s liege lady.

Countess Genevieve Hairyfoot
The countess has some halfling blood in her; after all, her mother adored pastries and that halfling gourmand who worked at the castle was often called to visit at odd hours. She now rules a prosperous county in the middle of the kingdom. Her eight followers are Wodwick, a sergeant -at-arms, four men-at-arms, a scribe, the Baroness Salamandra, a childhood friend and Sister Sarah, a 5th level cleric.

King Humphrey the Antichrist
King Humphrey was birthed on a moonless night, the midwife a witch and his mother a sacrifice. A bastard, he was presented to the court by his uncle and, within a decade, had seized the throne and instituted a reign of terror. His followers include five scribes, five men-at-arms and their sergeant-at-arms, Zabbo, and the wicked Viscomte de Gris.

12 thoughts on “The Notable Noble – Nicknames and Their Power”