Travelers of Space was a sci-fi anthology published in 1951. Today, Golden Age Comic Book Stories presented a collection of aliens that were illustrated in that work. My two favorites are “Slot Eyes” and “Beminbra”. Slot Eyes looks like a dashing alien philosopher-knight, or perhaps his planet’s equivalent of Evil Knievel. Beminbra is who I would cast for a pulp make-over of the Star Wars franchise. These guys are begging for stats, so I might have to come up with something – completely divorced from the stories in which they appear, of course, since I’ve never read them. You could really build a campaign involving alien adventurers in a fantasy setting, trying to figure out the strange and unwholesome customs of the humans while bashing heads and gathering coins so they can repair their starship. 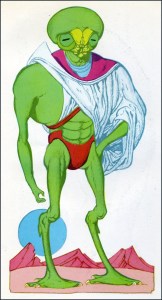 3 thoughts on “Travelers from Space”