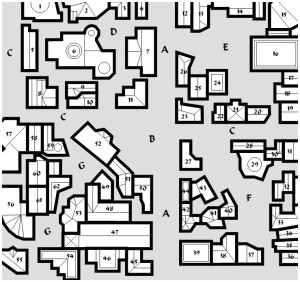 As mentioned in a previous post, I only detail a small part of a city-state. This gives the players a “home range” that they understand, and tends to make the various NPCs more important and meaningful because they are interacted with more often. Naturally, if an entire campaign were to be set in a city-state, I would detail more of it.

Most of the inhabitants detailed below do not have combat statistics presented for them. In these cases, use one of the following sets of statistics:

A. Purple Street
Named for the old Purple Kingdom, of which Ophir was once the capital. The Purple Kingdom was named for the purple dyes that the people of the Wyvern Coast once specialized in. Purple Street has the look of a fancy street that is showing its age. Most of the entryways are set a few feet below street level. The street is paved with prophyry tiles (a purple stone) and lined with limestone troughs filled by water bearers in the employ of Zargo.

Crowds along this street include foreigners just arriving to the city (including adventurers), street walkers, citizens going about their businesses, noisy fishwives, sailors looking for a good time, urchins practicing their pick pocketing (1 n 6 chance adventurers lose a purse or other small item while on this streets) and guardsmen. Priestly processions also move up and down this street, as do herds of animals purchased in the Beast Market and headed for a merchant galley or cog.

Following this street north, one eventually reaches the Palace of Zargo and the manor of his grand vizier. To the south, the street reaches the banks of the River Asphodel and the quays and warehouses that line them.

Grand Vizier: Lathta is Prince Zargo’s grand vizier. He is a youthful cousin, dandyish and pessimistic, but completely honorable. His four-story manor abuts the palace and connects to it with secret tunnels that also, via trapdoors, connect to the catacombs. Lathta does not like Zargo, but fears to act against him, though he does his best to intercede for victims of the Prince’s cruelty. Lathta’s wives, Jamila and Hasda, live on his country estate with his seven children (all sons). Lathta keeps his treasure (150 pp, 580 gp, 480 sp, a large red garnet worth 400 gp) in a locked vault in his cellar. His manor is always under the guard of twenty men-at-arms (chainmail, shield, battle axe, light crossbow, 10 bolts).

Palace: The palace of Prince Zargo dominates the center of Ophir. Composed of six-foot thick grantie walls, it is five stories tall and features two onion-shaped domes covered in beaten gold. The palace’s courtyard features gardens and fountains and leads to the prince’s stables, which house his twelve racing stallions.

The palace is under the constant guard of thirty men-at-arms under the command of three sergeants, a lieutenant called Galim and Elektra, the captain of the palace guard. The entrance to the palace is guarded by Korvos, an ogre. Korvos is virtuous and honorable, and much beloved by the children of Ophir. He is known to be loyal to the prince, and has never been known to be derelict in his duties.

Zargo keeps most of his treasures in the Treasury, but he keeps numerous art objects (15,000 gp worth) spread throughout his palace. Zargo has a harem of twenty wives and 43 children. Zargo’s older children live outside the city-state on his manors. His younger children (fifteen of them) live in the palace with their mothers. Zargo’s harem is protected by five eunuch bodyguards (HP 13, 11, 10, 10, 10), all wearing chainmail hauberks and armed with curved two-handed swords.

Zargo is advised by his grand vizier (see above). His court magician is Jamala, a necromancer with access to the catacombs beneath the city-state and a laboratory in which she experiments with re-animating dead tissue. Zargo’s chapel, dedicated to Lotan, is overseen by Taru the Black, a rival and ex-lover of Aralla, the pontiff of Ophir and high priestess of Lotan. He still bears the scars of their romance.

• Jamala, Magic-User Lvl 9: HP 32; AC 10 [9]; Save 7; Special: Magic-user spells (5th); Silver dagger, spellbook, chime of opening, 9d6 gp. Jamala’s laboratory is protected by six zombies. She wears crimson robes traced with golden runes and flashy (but mostly brass) jewelry worth 50 gp. Jamala walks with a limp, one of her feet being mauled once by a chimera and replaced in a semi-successful experiment with the foot of a dead dancing girl.

B. The Market of Braying Beasts
At the intersection of Purple Street and the Processionary is the racous animal market. Temporary pens fill the center of the square and hold goats, sheep, cattle, horses and camels (and occaisionally more exotic and dangerous creatures). Surrounding the pens are numerous merchants selling the beasts, almost always in large lots, to other merchants, who might then march them down Purple Street to an awaiting galley on the river. Animals are never moved north from the market, as this is forbidden. They enter the market in large, noisy herds from the Processionary, either from east or west. The assassins of the city conduct most of their business here in the din and cover of the crowds.

C. The Processionary
This is the main street between the gates of the city -state. It has considerable cart and camel traffic, and is thronged by peddlers, tinkers, sailors, prostitutes and cutpurses. It is paved with limestone cobbles, which are in poor repair and present a hazard to those who would engage in a fight (save each round or fall prone). Following the Processionary east leads to the Garrison, and to the west leads to the Chancery and Royal Treasury.

Chancery: This is the manse of Riba, the Chancellor of Ophir (meaning she is in charge of the city-state’s finances and tax collection). Riba is the prince’s aunt and holds her office despite her stated distaste for many of his actions and methods. She is an old woman, moody and blustering and feared by her tax collectors. She suspects that Zargo is the leader of the assassins and would dearly like to expose and destroy him and take the throne herself. She is served by several servants who are led by her valet, Horak. Riba is tall and stately, with long, braided silver hair and thin lips often turned down in a scowl. She dresses in robes of dazzling colors and keeps her jewelry simple and understated (gold, 300 gp worth).

Royal Treasury: This building is a fortress of limestone blocks with a single entrance protected by an steel portcullis. It is guarded by thirty men-at-arms (fifteen archers with ring mail, shield, light crossbow, 10 bolts and hand axe and fifteen heavy footmen with chainmail, shield, pole arm and curved short sword). The treasury’s commandant is Balulla, a Cushite with sharpened teeth and an absolute dedication to duty. Balulla is assisted by two sergeants, Jali and Hasif.

Garrison: The garrison is a large keep of limestone with five tall towers. The commander of the garrison is Lord Amiral. Amiral has chiseled features. He is mysterious and philisophical and worships the Ogdoad, agents of Chaos. He has five wives, the eldest handling the day-to-day affairs of his house and, truth be told, his command. He has twenty children (12 sons, 8 daughters) ranging in age from 3 to 26. Two of his sons, Zarkon and Farim, serve under him. His eldest daughter has received extensive training as a magic-user. His treasure consists of 10,000 cp, 10,000 sp and 1,100 gp kept in a vault in the keep protected with a fire trap (4d6 damage). Amiral makes no bones about his religion. He devoutly worships the chaotic Ogdoad. This has raised the ire of the Temple of Lotan, but worship of the frog gods has spread among his soldiers.

Tomorrow I will finish up the denizens of Ophir (well, not all of them, I have to save something for NOD #2). I’m then going to post some ideas on wilderness campaigns and strongholds and then delve into the Nabu desert sandbox to the east of the Wyvern Coast. Somewhere along the line I’ll post the druid and illusionist and do some previews for PARS FORTUNATM.

4 thoughts on “On Ophir, The City of Slaves Part 2”